When it comes to playing the role of a powerful and intimidating supervillain like Thanos, physical fitness is of the utmost importance. Josh Brolin, the actor who portrayed the character in the Marvel Cinematic Universe, certainly took this to heart. Even in his late 40s, he underwent a complete physical transformation to embody the role of Cable in Deadpool 2.

It’s inspiring to see how dedicated an actor like Josh Brolin is to his craft, and it’s only natural to wonder just what went into his workout routine and diet plan to achieve such a phenomenal physical transformation. So, without further ado, let’s take a closer look at the methods and techniques that helped him become the formidable villain we all know and love.

Josh Brolin’s goal for Deadpool 2 was to achieve a physique that was both muscular and lean, perfectly fitting for the role of a dominant anti-hero. To achieve this, he relied on a workout plan that focused on building muscle mass and promoting fat loss.

His routine primarily consisted of weight training and cardio exercises. Being extremely dedicated to the role, Josh would hit the gym twice a day, pushing himself to the limit each time with intense workouts.

He would focus on compound exercises like squats, deadlifts, and bench presses to build his muscle mass and also include isolation exercises like bicep curls and tricep extensions to target specific muscle groups.

Additionally, he would also incorporate cardio exercises such as running, cycling, and rowing to burn off any excess fat, resulting in a physique that was truly worthy of the character he was portraying. 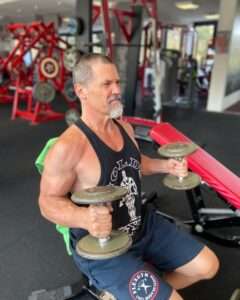 Josh Brolin divided his daily exercise routine into two parts, training twice a day. His morning workout sessions were focused on promoting fat loss, giving his body a lean and athletic look. These sessions included calisthenics and agility and mobility drills to enhance his overall athleticism.

His evening workout sessions, on the other hand, were centered around weight-lifting exercises to facilitate size and strength gains. He followed an old-school bodybuilding style training split, where he trained 2-3 muscle groups in a single session.

During his weight training sessions, Josh never lifted weights that were heavy enough to compromise his form. Instead, he chose weights that allowed him to perform exercises with a full range of motion and get better muscle contractions. He hit the gym 5-6 days a week and his workout routine for the week was as follows:

Wednesday- Back and Biceps

Josh Brolin understood the importance of rest and recovery when it comes to weightlifting, and he incorporated different rest periods into his workout routine accordingly.

When it comes to performing compound exercises like squats and deadlifts with heavy weights, he would take a break of around 120 seconds between working sets. This allows his muscles to recover and build strength for the next set.

On the other hand, when he performed isolation exercises such as curls, extensions, raises, and flies, he minimized his rest periods to just 60 seconds. This approach is known as “metabolic conditioning” and it helps increase muscle endurance and burn more calories.

By keeping his rest periods shorter during isolation exercises, he was able to maintain a high level of intensity and keep his heart rate up, resulting in a more effective and intense workout.

Josh Brolin understood the importance of proper warm-up and cool-down routines to prevent injuries and improve his performance. He started each of his training sessions with a well-structured warm-up routine. He would warm up his muscles by using a weight that was 50% of his first set working weight and perform 15-20 reps on his warm-up set. This helped to increase blood flow to the muscles and prepare them for the intense workout that was to come.

Similarly, at the end of his training sessions, Josh would perform static and dynamic stretches as a cool-down routine. This helped to relax his muscles, reduce muscle soreness and improve flexibility. These stretches were important for him to prevent injuries and reduce muscle soreness after an intense workout. It also helped him to maintain his range of motion and muscle balance. This approach of having a proper warm-up and cool-down routine was an essential part of his workout routine.

Josh Brolin was a big advocate of the drop set technique, which is a weight training method that involves performing a set of an exercise to failure, then immediately reducing the weight and perform another set to failure. He believed that this method fully stimulated his muscles, leading to more muscle growth.

He would also occasionally incorporate other advanced techniques such as partial reps, forced reps, and supersets into his workout routine. Partial reps are a type of exercise where only a portion of the full range of motion is performed, allowing for more weight to be used. Forced reps are a type of exercise where a spotter helps the lifter perform additional reps beyond what they would be able to do on their own. Supersets involve performing two or more exercises back-to-back with little to no rest in between.

By incorporating these advanced techniques, Josh was able to push his muscles to the limit and achieve even greater results. However, it’s important to note that these techniques are advanced and should be used under the guidance of a professional trainer, as they can increase the risk of injury if not performed correctly.

Josh Brolin understood the importance of cardio in his workout routine and instead of relying on steady-state cardio, he preferred to perform HIIT (High-Intensity Interval Training).

HIIT is a great way to burn calories and boost metabolism. It’s also a time-efficient way of training as it can be done in a shorter time than steady-state cardio, and it keeps your body burning calories even after the workout is finished.

Josh would typically perform HIIT on the treadmill, bike, or stair climber, and typically would perform short sprints or high-intensity intervals followed by a short rest period. This type of cardio training helped him to burn fat, maintain cardiovascular fitness, and also helped him to maintain his lean physique. 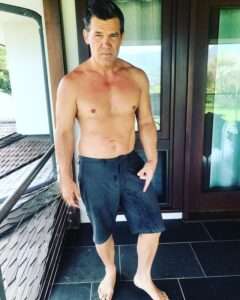 To achieve the domineering anti-hero physique, regular training was not enough for Josh Brolin. He also had to be extremely disciplined with his eating habits.

He followed a diet plan that was low in high glycemic carbs, meaning he avoided foods like sugar, bread, pasta, and processed foods. He instead focused on nutrient-dense, whole foods like fish, rice, eggs, vegetables, and water. He also had a bulletproof coffee in the morning as his breakfast.

Josh’s diet plan also included elements of intermittent fasting and the ketogenic diet. This helped him burn off excess fat from his frame without losing muscle mass. He consumed 4-5 meals a day, and his meal plan typically consisted of the following food items:

Josh was a dedicated fitness enthusiast who understood the importance of fueling his body properly to sustain himself through his intense workout sessions. To ensure that he had enough energy to push through the grueling exercises, he made it a habit to have a cup of keto coffee before hitting the gym. This special brew was fortified with MCT oil, a type of saturated fat that has been shown to have a number of health benefits.

Not only did the MCT oil in his keto coffee help to boost Josh’s energy levels, but it also promoted fat burning. This was especially beneficial for Josh as he was trying to lose weight and build muscle at the same time. The MCT oil helped him to burn fat while preserving muscle mass, allowing him to achieve his fitness goals more efficiently.

Josh’s keto coffee ritual was just one of the many ways in which he took care of his body and stayed on track with his fitness journey. It was a simple yet effective way for him to give his body the energy it needed to power through his workouts and make progress toward his goals.

It’s important to mention that Josh’s physique transformation was not achieved through the use of any performance-enhancing drugs such as anabolic steroids. He firmly believed in the power of hard work and dedication, and he achieved his impressive physique through an intense training regime and a strict diet plan.

Josh’s workout routine was designed to target all major muscle groups and included a combination of weightlifting, cardio, and high-intensity interval training. He also kept a close eye on his nutrition, making sure to consume a diet that was high in protein and low in processed foods. He also made sure to stay hydrated and get enough rest to allow his body to recover from the intense workouts.

Josh’s dedication and consistency in his training and diet routine were the keys to his physique transformation. It’s a testament to the fact that with hard work and determination, anyone can achieve their fitness goals without resorting to performance-enhancing drugs.

Josh Brolin understands the importance of proper nutrition in achieving optimal performance and aesthetic physique. To complement his diet, he incorporates a variety of supplements into his nutrition plan to ensure that his body receives all the essential nutrients it needs.

Josh’s supplement stack includes a pre-workout supplement, Branched Chain Amino Acids (BCAAs), whey protein, creatine, and probiotics. The pre-workout supplement helps to give him the energy and focus he needs to push through intense training sessions. The BCAAs help to keep his body in an anabolic state, which can help to prevent muscle catabolism and promote muscle growth.

To enhance his training performance and strength gains, Josh also takes creatine. He uses probiotics supplements to maintain the health of his gut and improve digestion. He also consumes whey protein to support his muscle recovery and growth.

Overall, Josh Brolin’s supplement stack is designed to support his overall health and fitness goals, by ensuring that his body is getting all the nutrients it needs to perform optimally, recover effectively and build muscle.

Hi, there my name is Kim, am the founder of healthandnutrionoline.com. The reason why I started this blog is that I like learning and sharing about fitness and healthy living. I hope you find some value in the information I provide and wish it can help you on your weight loss journey or fitness journey. You can contact me using this Email: [email protected]