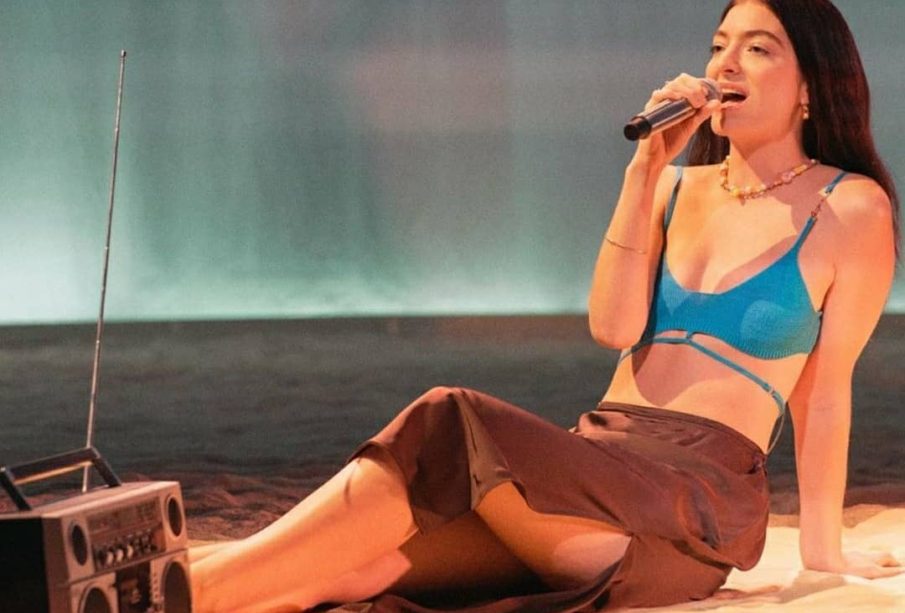 Grabe all the details of the Royals Singer Lorde Weight Loss journey, her workout routine, and diet plan in this article today.

But before we get to her weight loss journey and how she was able to be successful let’s get to know her briefly.

Her real name is Ella Marija Lani Yelich-O’Connor but she is professionally known as Lorde, she is a songwriter and a singer who was born on November 7, 1996, in Takapuna, Auckland, in New Zealand.

She began showing her interest in performing at local Venues during her early teenage, and in 2019 she signed with Universal Music Group and started recording material in 2011 when she cooperated with producer Joel Little.

She became more popular after releasing her first single Royals from the extended play of The Love Club.

Recently Lorde has released a new album Solar Power and it is performing so well that it reached number two in the  New Zealand Singles Chart.

In the Video of Solar power, Lorde seems to be slim and you can’t even fail to notice her well-formed abs.

This has brought up a lot of questions among her followers on different social media platforms asking if it is really true that she went through a weight loss journey. without wasting any more time let’s find out; 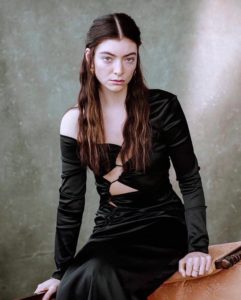 Lorde became famous at a very young age after releasing her single Royals in 2013, and she faced a lot of body shaming from different platforms on social media.

According to her, she said that people immediately started making fun of the way she looked. and in an interview with NME she said;

“It rocked my foundations and could have f—ed me, you know? I remember being made aware of my looks and my body in a way that I had never been.”

Lorde claims that people were so mean to her appearance in a way that she could have never imagined. She said;

“I remember all these kids online, I think I beat their favorite people to number one [on the music charts], and they were like, ‘F— her, she’s got really far-apart eyes.’ I remember being like, ‘Whoa! How did I get all this way without knowing I had far-apart eyes?’ Just weird s— like that,”

After four years of staying away from the spotlight since her last 2017 album Melodrama, Lorde has broken the silence with the new trending album called Solar Power.

When her single Solar power video was uploaded her fans noticed how well-formed her abs were, she was wearing a half top showing almost the whole part of her abs and they looked amazing.

This was evident enough to show that Lorde went through a weight loss journey and she gained her confidence back from those who were body-shaming her.

To achieve a well-formed lean physique like that of Lorde you need to have a workout routine plus a very well healthy Diet plan and this is exactly what she did to have that sexy amazing body.

Today we are going to see her workout routine in this article. Maybe it will be helpful to you to also get the physique you dream of.

According to her trainer Allison Kimmel while talking to womenshealthmag.com she said Lorde trained with her during her recording of the last album Melodrama and during her European tour.

Due to her busy schedule, she said they would use the little time they could get and squeeze in the workout even if it was only 30 minutes.

“Other times, we had over an hour and could extend her warm-up or add some extra cardio sets.”

Kimmel helped Lorde to work out at least four to five days a week that is if the Tour schedule allowed them.

They would basically start with a 15 minutes jog or other cardio workouts and then they would do some Yoga movements after they would do traditional strength training.

Kimmel also helped Lorde with different workout moves that target her full body and below are the workouts and the Reps/Time.

Performing on stage for a long time is not something that is easy it takes a lot of fitness and stamina so another gym day for Kimmel and Lorde is like this below. 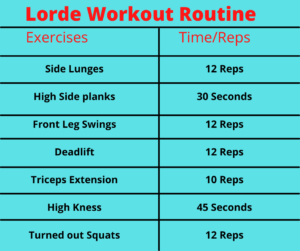 If you’re struggling with losing weight you can start adding these workouts to your daily routine and see your body transforming day by day.

You can perform each workout in 3 to 4 sets and avoid over resting to keep the intensity of the workout. Am sure this will help you if you put in the work.

According to the intensity of the workouts, it’s clear that Lorde doesn’t fear any challenge and the results speak for themselves.

So if you’re also on the same track of losing weight you should be ready to put in the work and also be patient because losing weight takes time.

Camille Rowe Weight Loss Is Trending But Is It True?